I’ve been feeling glum lately. The changing weather makes for gray skies and gloomy days—the kind when it’s hard to tell what time it is and all day it feels like it could be either late morning or early evening without the sun to help mark the passage of time.

Plus, I was sick for weeks—still am, a bit—with the cold that comes and goes, sometimes accompanied by a fever and body aches and gets better but never seems to really go away. I felt horrible as I watched news of super-storm Sandy and all the devastation on the east coast; worried for friends who were without power. The election brought out so much hate and lies and fear and stubbornness, people bashing others and refusing to listen to dissenting opinions, blaming and yelling and name-calling…I had to get off social media for a few days.

And then along with the outpouring of relief and celebration and disappointment after the voting, there was also an unbelievable number of folks who went crazy. Regardless of your political opinions, in no way was the election a “tragedy” rigged by “terrorists.” I was honestly scared by so many of the comments I saw on the internet. The lack of interest in truth, the complete absence of critical thinking or applied logic, the hate-speak—it’s terrifying to think that there are so many people who are unwilling to even listen to opposing views and desperately cling to their delusions. One of my biggest fears is people who are able to hang onto a belief that has been proven false. Progress is impossible if you refuse to admit there’s a problem, obfuscate the issues with smoke screens to ignore real dialogue. Healthy debates—real debates—are good for solving problems; I’m not saying we should all just get along. But disagreeing requires a back and forth, which is what we need. Disagreement would be a step in the right direction, as all there seems to be right now is people screaming at each other and that means no one can hear a thing.

Whoa, sorry. That got away from me a bit there. I basically wanted to say that all of this along with a few personal issues and a general feeling of failure and career worries have gotten me into sort of a funk. I want to hunker down beside a fire and get swept up in a good story and ignore the world. But there is so much to be done. Isn’t that always the way?

I have also been feeling unable to write, hence the dry spell here on the blog. I don’t know how much of my feeling blue is caused by or is causing my inability to write, but whichever was the chicken or the egg doesn’t matter because my mood and my word count have remained low. It’s become a cycle, and since I’m all about trying to break those (have you read my book?), here I am, writing, and hoping that I get a boost.

If you’re still reading, thanks! As a reward for following me through to the end of this ramble, which came out of a post that was just meant to say something like, “Hey Guys! I’ve been feeling glum so I’m not writing much, but here are some words of wisdom from Nancy Drew’s Guide to Life,” here’s the payoff: some words of wisdom from Nancy Drew, one of my first literary influences, the strawberry-blond queen of sleuthing.

On Etiquette:
“It’s a bit gratuitous to quote passages from Shakespeare on a daily basis.” –The Clue of the Dancing Puppet

On Dating:
“A young lady with some judo skills can take care of unwanted advances in short order.” –The Whispering Statue

“After receiving an electrical shock to the system, find as many men as possible to vigorously massage you.” –Mystery of the Glowing Eye

On Braving the Wilderness:
“Don’t try to ford rocky streams in an old jalopy.” –The Message in the Hollow Oak

“It’s a good idea to arm yourself when in the wilderness because you just might have to kill a large lynx.” –The Secret at Shadow Ranch

And one final word of advice from Nancy for your holiday weekend:

“Cover your face immediately when confronted with an explosion. Obviously, it is good to avoid explosions in general.” –The Mystery of the Fire Dragon

This is me, Melanie. 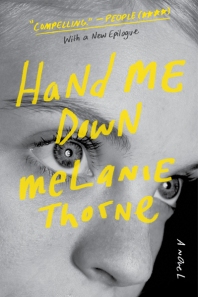 *Photo Credit: The author photos on the Home and Bio pages were taken by Lisa Farrer at Lisa Farrer Photography.*
%d bloggers like this: